A must-see destination to admire the most beautiful spot on the Côte d'Azur: the bay. Visit the botanical garden located in the town of Eze. Discover the sumptuous plants of the region and the world. This remarkable garden is a real open-air museum with the statues of Jean-Philippe Richard. Your botanical walk in one of the most beautiful perched villages in France.

The most beautiful panorama of the French Riviera 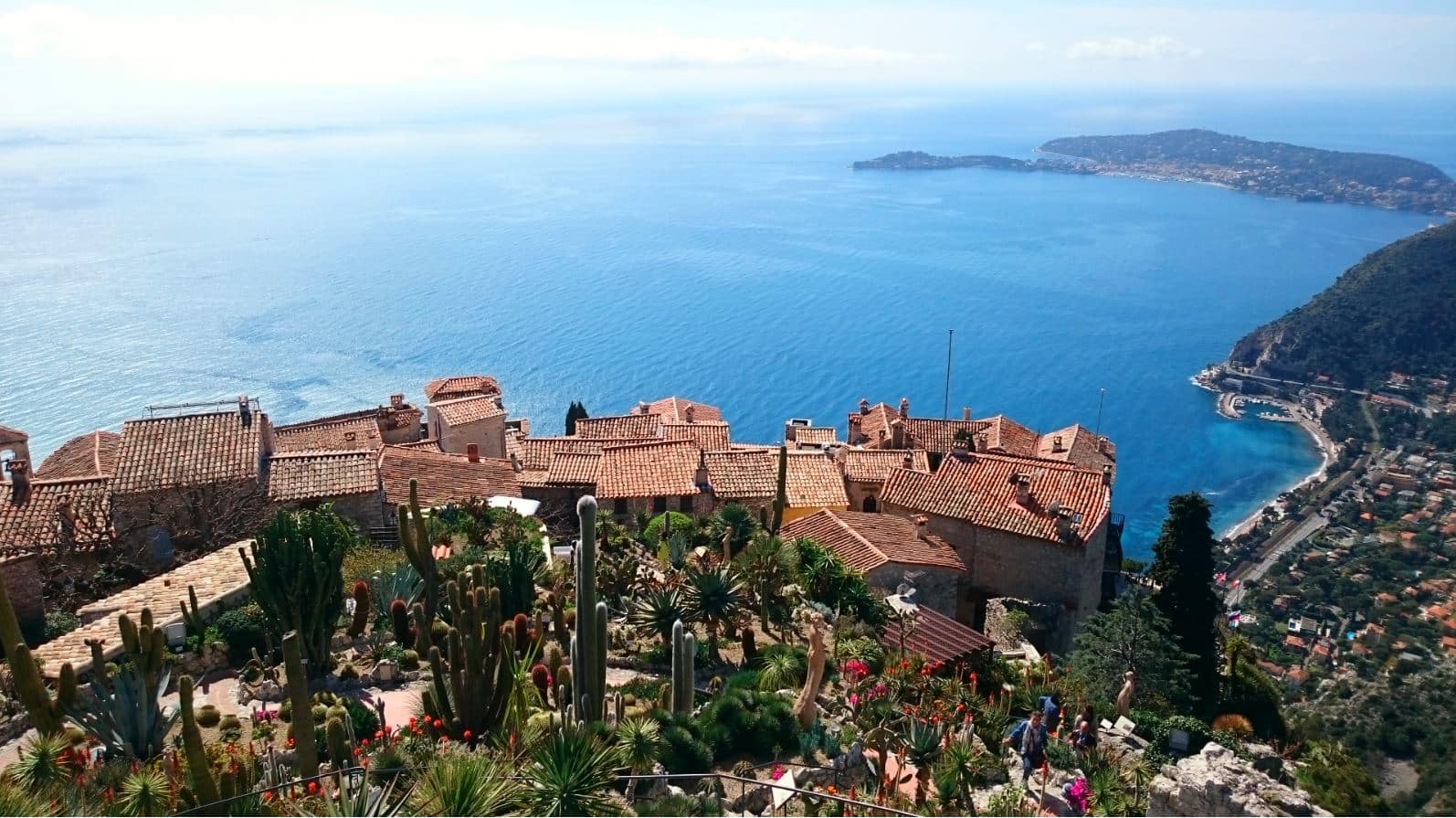 Panorama of the garden of Eze

Set in the ruins of a medieval fortress, the exotic garden of Eze offers an exceptional panorama of the Riviera.
Perched at an altitude of 429 metres at the top of the village of Eze.
You have a panoramic view from Mount Esterel to the Gulf of Saint-Tropez.
Here you are on the Riviera, that is to say the place where the mountain flows into the sea.
On a clear day you can see the Corsican mountains. Let your gaze admire the Mediterranean Sea and its coastline.

The story of the creation of the Garden 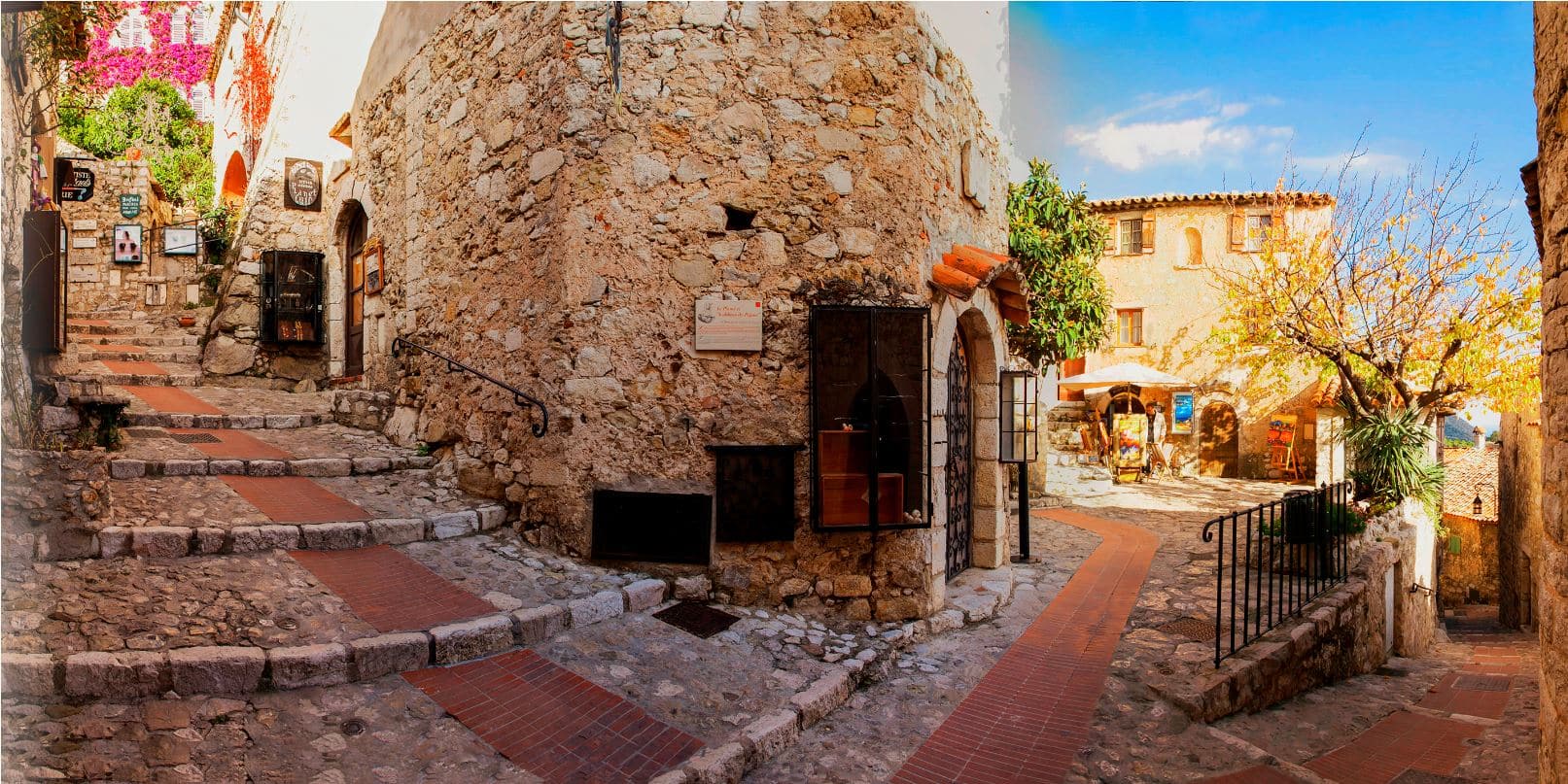 Located on the ancient fortress of Eze-Village. Built from the 12th century and destroyed by Louis XIV during the War of Spanish Succession in 1706.
Located on a very important surveillance point of the Mediterranean due to the proximity of Villefranche. The latter was the arsenal of the House of Savoy.

The English were able to take advantage of the mild Côte d'Azur climate.
They created many gardens on the Riviera and introduced several exotic species, notably palm trees.

The south-facing location makes this place suitable for succulents.

After the Second World War, the mayor of the time, André Gianton, and Jean Gastaud, the architect, decided to create an exotic garden in the ruins of the Château. Mr Gastaud is the creator of the exotic garden of Monaco.

At an altitude of 429 m., the temperature in the garden in summer is around 32°c.
In winter, on the other hand, it is sometimes necessary to cover the plants.

Plants from all continents 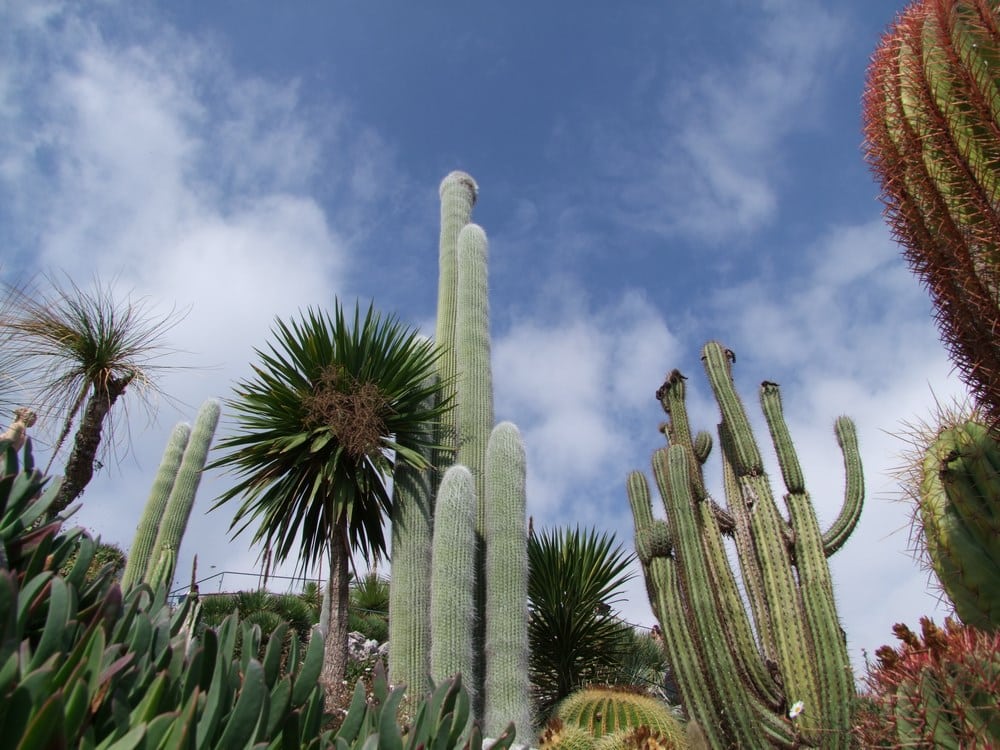 Let yourself be guided by the thematic trail.
Discover the various varieties of cacti, aloes, agaves, but also Mediterranean plants in the northern part and tropical plants in the Zen area.

For each species, an explanation: A fun and educational trail

An enamelled lava table trail allows you to familiarise yourself with these plants and the history of the village.

Plant identification plates with QR code allow visitors to familiarize themselves with the plants, their origin, their use.

For those with a green thumb:

You will receive by e-mail the complete information sheets with the information on how to cultivate a particular plant at home. 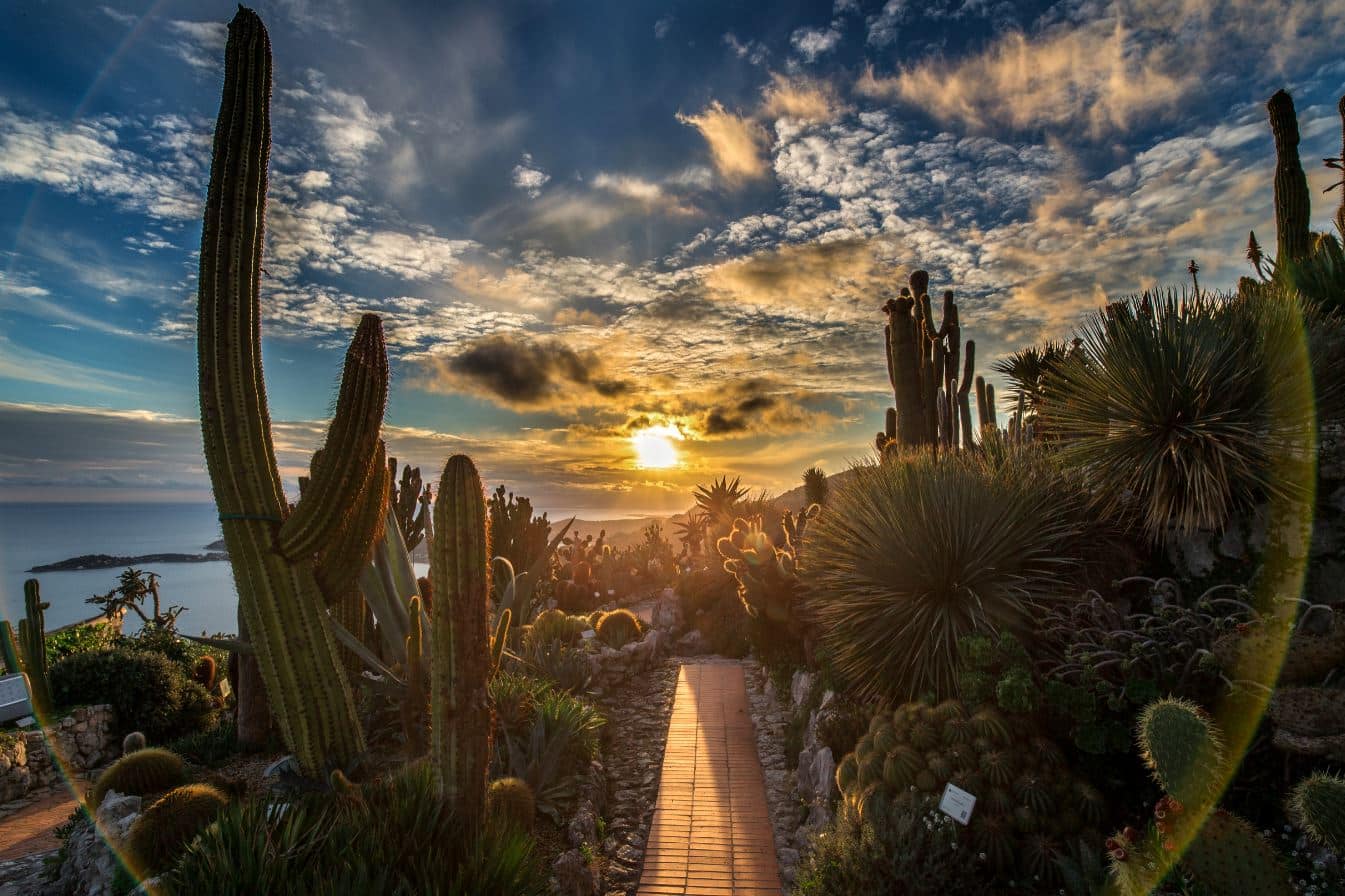 South side, planted with cacti

On the southern side of the garden, succulent plants line the paths: agaves, cacti, aloes, euphorbias and other crassulaceae. They are native to the desert regions of North America, Mexico and South Africa.

On the northern side, Mediterranean vegetation

On the shady and humid northern slope, is planted with Mediterranean-type plants and adapted to shade. Part restored in 2014.

Myrtles, rockroses, arbutus and other euphorbias rub shoulders with more exotic species such as tree ferns, hostas from China or agapanthus from South Africa.

Discover the article : A day in Eze! 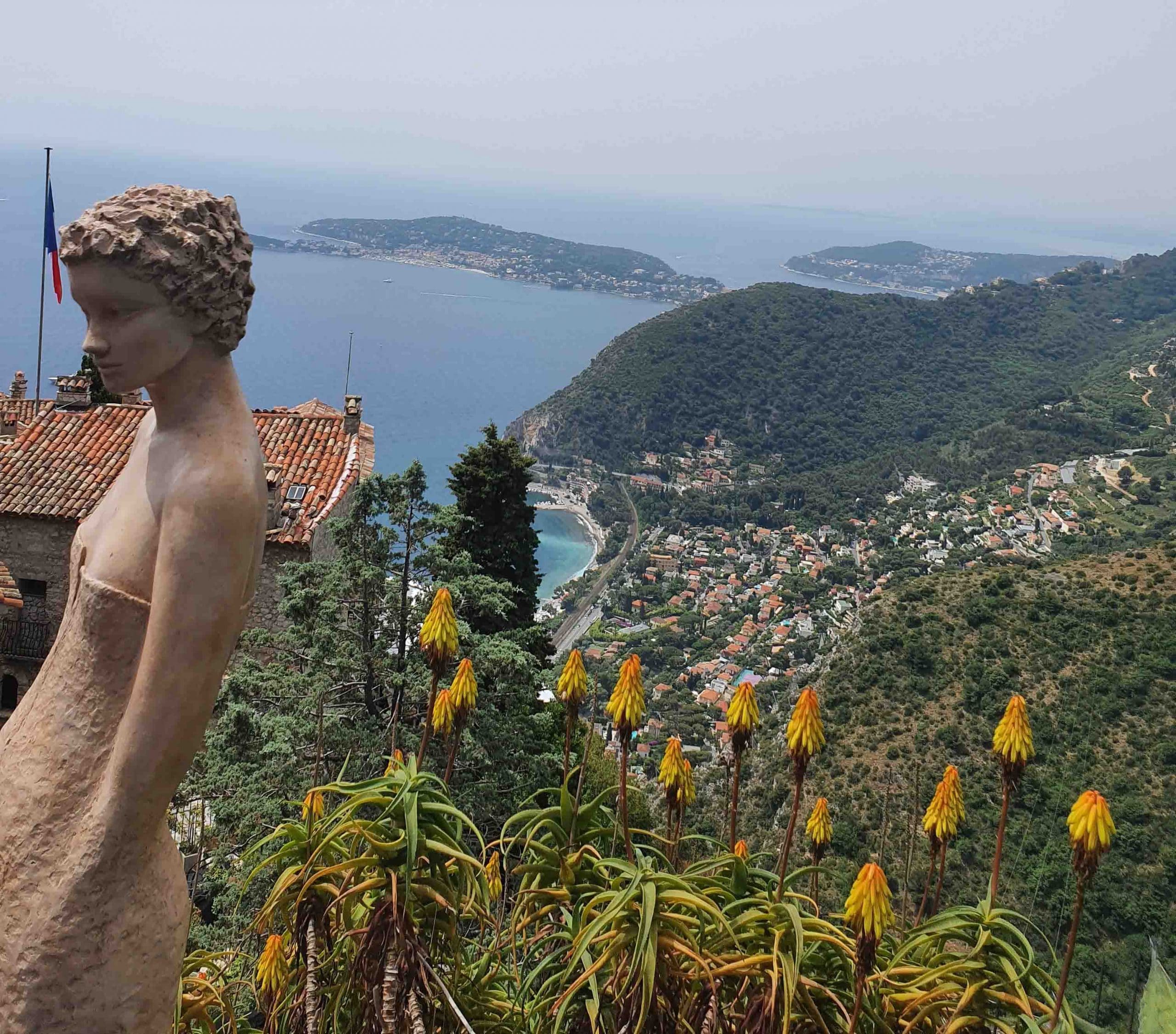 Garden of Eze and the statues of Jean-Philippe Richard

The particularity of the garden is its location on the side of a rock. In order to create the garden, they had to bring in substrate to fill the planters in the rock.
At that time, everything was carried up by mule or man. Nowadays, everything is brought in by helicopter. 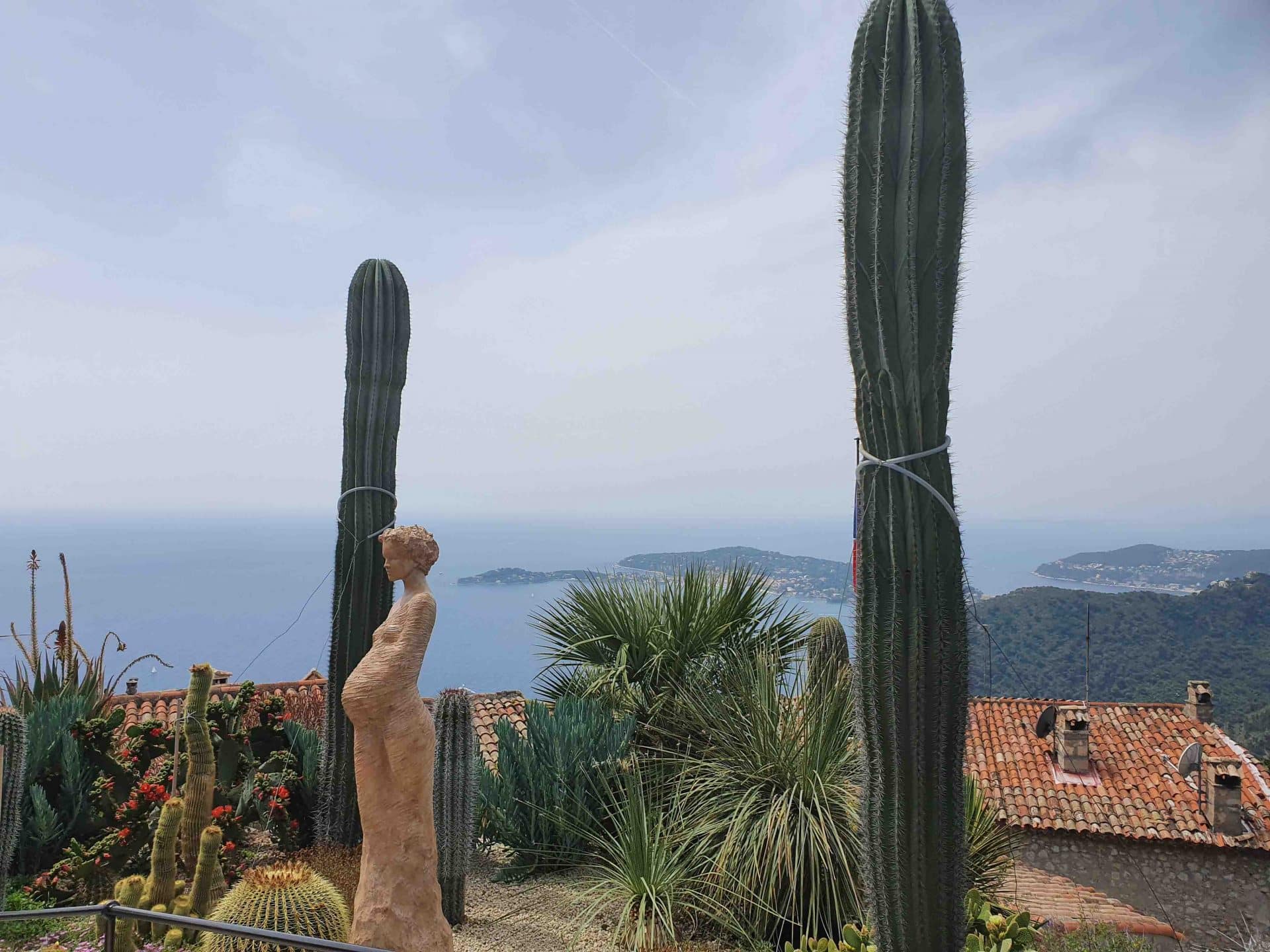 Garden of Eze and the statues of Jean-Philippe Richard

The 14 statues by the artist Jean-Philippe Richard, make the garden an open-air museum.
During your visit, you will discover his damselflies.
Chloé, Justine, Charlotte, Anaïs, Rose des vents, Barbara... are suspended between heaven and earth. They laze in the sun.

The exotic garden just got bigger.
Everything you need to relax and enjoy a fresh space with a waterfall and a mister.
Deck chairs are available to relax under subtropical plantations.
A true haven of tranquillity to enjoy sunbathing and an exceptional view.

It is very difficult to park near the garden.
Prefer the bus, the TER or on foot if you are staying next door.

By car
Parking places Colette and Figuiera
The car parks will be subject to a charge as of 1 June.

By train
Find your route on SNCF > https://www.sncf.com/fr/itineraire-reservation/itineraire
From the SNCF station of Eze sur Mer Take the bus n°83
Bus stop " Eze-Village ".

Accessibility: the garden is not suitable for people with reduced mobility.
Length of visit: 40 min to 1h30.
Best times: spring and summer to enjoy the clear view and the flowering
Dogs are allowed on a lead.

GOOD DEALS: Choose combined tickets with the Villa Ephrussi de Rothschild and the exotic garden of Eze from €18.
Reduced rates €13.50.

If you like Jardin Exotique d'Eze
We recommend you